I haven’t always loved running. To be completely frank, I used to dread the thought of a running, but I think it’d be safe to say that I’ve fallen in love with lacing up my running shoes and escaping for an hour (or two).  Last March, I ran my first half marathon with my Mom and became instantly hooked to races. Not only do I love running races because I’m side by side (commiserating) with thousands of other runners, but because the electricity of the crowds really gets me going. My roommates, however, will say my favorite part is the medal at the end – I guess I’d be lying if I said I didn’t love the bling at the end, too. Since that first half, I’ve run two more half marathons and four other smaller races.

As part of my 2016 New Year’s Resolutions, I made it my goal to qualify for the 2017 NYC Marathon via the 9+1 program. This program is a great way for NYRR Members to qualify for the race because it not only promotes the smaller NYRR races (9 races), but also encourages people to give back to the running community by volunteering (+1). With this goal in my mind, I knew that 2016 was all about getting into optimum marathon shape and staying injury-free. I had no intentions of running a marathon this year, but when one of my closest childhood friends texts me asking if I wanted to run the Marine Corps Marathon, I had to say “YES”.

Part of the reason I immediately said “YES” to running this marathon was due in part to the fact both my parents ran the Marine Corps Marathon 15 years ago. My parents started training for the 2001 MCM with a group of their close friend and eight year-old Meg would bike alongside them on their long runs, haul water, and cheer them from the sidewalk. This really sparked an insatiable passion for the sport at an early age. It would be an understatement to say that I’m so excited to make a “return” to the MCM and run in my parents footsteps.

2016 is all about pushing my limits and running the Marine Corps Marathon is the perfect challenge.  Here’s to running my first 26.2, crushing my goals, and many ooh-rahs along the way. 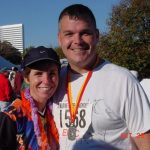 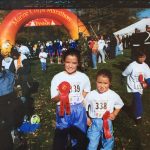 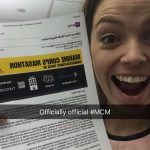