Yikes! It feels like I’ve set a new record in terms of not writing in forever. My life has been a blur to say the least. My days seem to flow together with no real definite end or beginning to the day, to the point where I couldn’t even tell you what the date is. November has passed by in the blink of an eye and I cannot believe Thanksgiving is in a mere three days. The past few weeks have consisted of early wake ups, late nights, and enough work to make the inner-nerd in me cringe (and to think that I’m busy in-season).  I realized after looking at my blog that I a) Can cross something off my 20 list and b)  I never fully went into details about the Emory game so I feel it’s appropriate to blog about that today.

WE BEAT EMORY <—- That needed to be in all caps because that’s how I would tell you – I would be in your face and screaming it from the top of my lungs. Just going back and thinking about that moment makes me smile.

Going into the Emory game, our team knew we had our work cut out for us. The previous weekend in Chicago and St. Louis was rough on all of us to say the least. On the following Tuesday we lost  2-0 to Mt. St. Mary in a game we should have won, and then on Friday morning we tied Carnegie Mellon in a 0-0 draw that was extremely physical. I came back to recovery Saturday morning needing some TLC and a lot of ice after punching a ball out of the box (and taking out a forward) in the final seconds of overtime. The game Sunday just seemed to be a mounting situation, an almost impossible task. 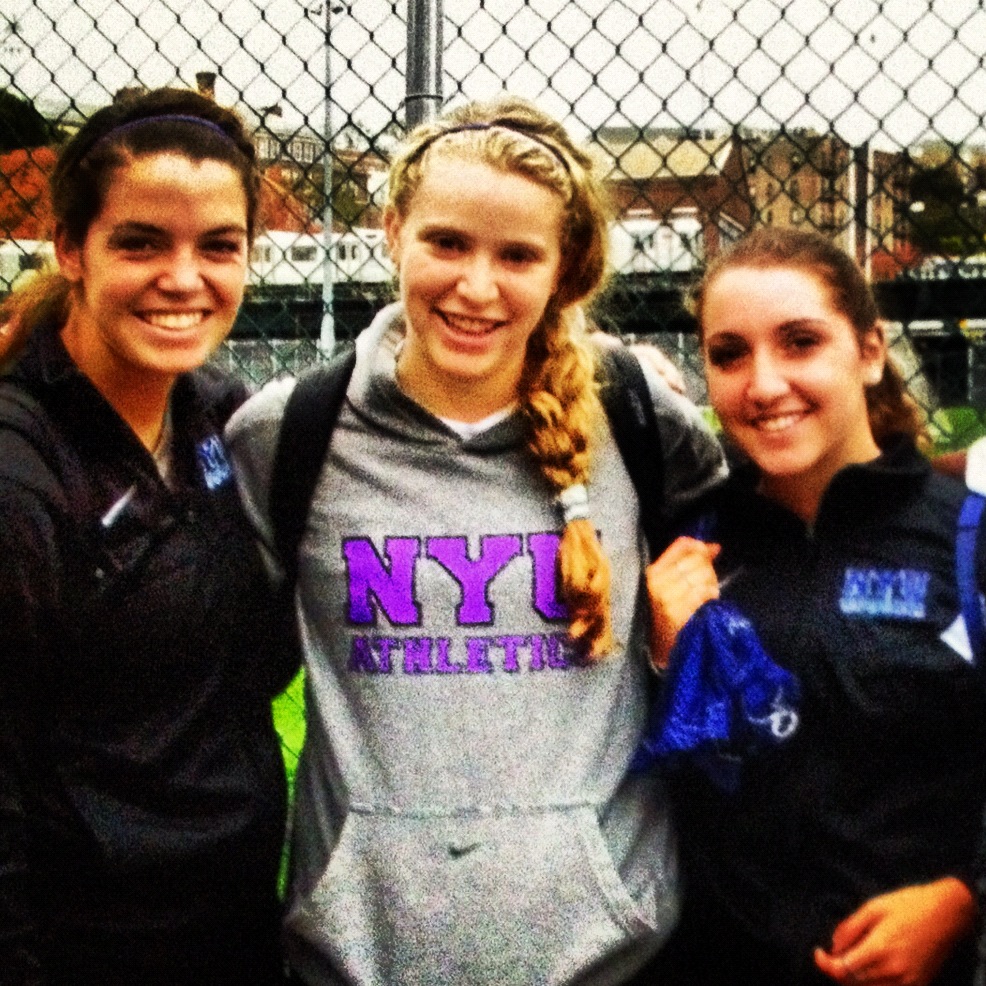 So Much More Than Friends

Each of us knew that in order to even be consider for the NCAA selection bid we needed to beat Emory. It was one final push that could make or break us and to be honest I didn’t know how much “fight” we had left in us. For those who don’t follow NYU Women’s Soccer, Emory is always our big game of the year. Last year we lost to them 3-2 in over time and we have never beat them in our program’s history (they were 18-0 against NYU). Prior to our game, Emory was undefeated in both the regular season and in the UAA league for TWO YEARS. They had the longest active winning streak in all of Division III and were (at the time of our game) ranked number one in the country.

The night before Emory, my Dad flew into the city from Paris on the way home from a business trip. I was beyond excited for him to be in New York and to catch the biggest game of the year. After grabbing a quick bite to eat with him on Saturday night, I found my place between the covers and tried my hardest to get a good nights sleep. Though I got a solid amount of sleep, I unfortunately slept through two alarms, rushed out of my room, bee-lining straight towards Coles. As soon as I got there, I tried to grab my jerseys  but much to my dismay the Equipment Room had lost temporarily misplaced them so I headed down to the Trainers to get all taped up and cleared to play. After changing into some warm sweats, I grabbed a banana (yum) and gatorade, then hopped on the bus.

The air was much more brisk and the sky had settled into a grayish haze over Gaelic Park by the time warm-ups began. The sound of Lion King echoing throughout the stadium indicated it was time to get moving. The battle was about to begin. I had an “okay” warm-up which is usually pretty indicative of how I usually play in the game, which made me very nervous going up against the top ranked Emory. Without going into much detail, we played two very tight, scoreless halves and entered into overtime confident we could come out with the W. Our team kept composed, and unlike our opponents we didn’t panic because deep down we knew that we were going to win. That’s what separated us from Emory.

The first overtime began and ended quickly and the second period was well on it’s way to being over when Erin Ahmed slotted a ball into the back of the net. It was unreal. I think I went into shock and her goal didn’t really register into my head until much much later (during the blackout as a matter of fact). I ran past girls who had fallen to the ground, embarrassed by their loss to us – a dark horse in the UAA and jumped onto my teammates. Hugs were endless and I think I may have lost my voice in the celebration. Like I discussed in the previous post, we were told during our cool down that class was canceled the following day because of the impending hurricane but we didn’t care. It was just a perfect ending to one of the most grueling weeks of the season. 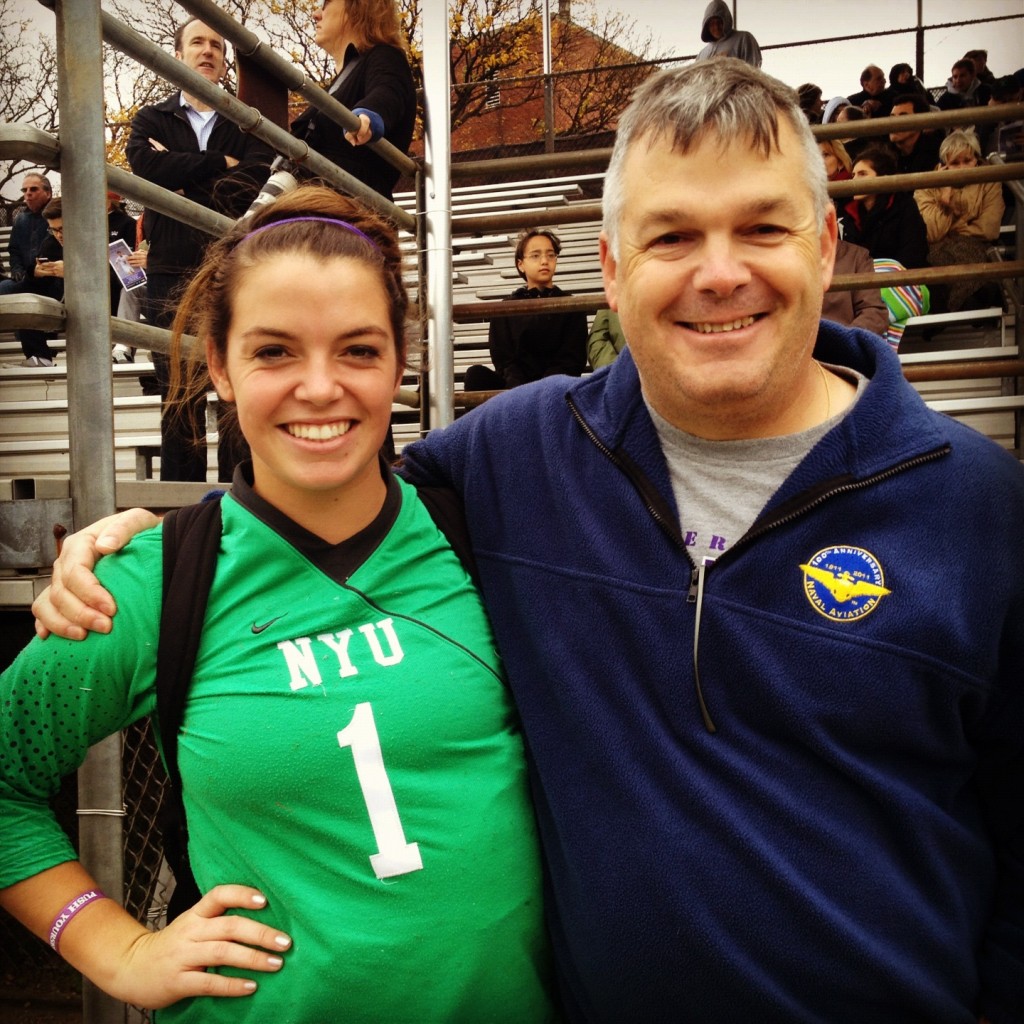 Couldn’t Have Asked For a Better Weekend

So going back to my list, I’m crossing off #13: Break a Record. Though I didn’t individually break any of these records, our team broke one of the longest records in NYU history and I’m so proud to be a part of it. The more I move down my list and the more I set and reset goals for myself, the more I realize that it’s less about the individual accomplishments and more about the team. The team is the ultimate champion and we proved that that weekend.

We beat and shutout Emory. I’ll never get sick of saying that.