My love for all things sports-related stems directly from my very active and athletic childhood.

Watching football on Sunday was considered a religious holiday and my early February birthday was, and will always be synonymous with the Super Bowl. I grew up playing on all-guys teams, because the number of girls interested in playing sports in my community was dismal.  My mom introduced me to more sports than I can remember and coached my youth “recreational” days. My dad guided me through the college recruiting process, always making a point to sneak into the athletic facilities while on campus tours.  So when the opportunity presented itself to major in Sports Management and move to New York, home to over ten professional sports franchises, there was no question to what my answer would be.

Throughout high school, I kept busy with a variety of sports – mostly soccer, volleyball and basketball, but my main focus was always soccer – it was my first true love. After tearing my ACL in the Spring of my junior year, I found a new passion and on the other side of athletics. Senior year I became our schools sports anchor and main sports photographer for the yearbook – that’s when I first realized that I wanted to work in the sports media field as a sideline reporter or in-studio analyst.

In August of 2011, I moved to New York City to go to school at New York University. As a goalkeeper of the women’s soccer team, I have had the opportunity to blog for the team for the 2011 and 2012 seasons, which you can find here! We had a great four seasons and I am so blessed to have been part of such a great team. In addition,while at NYU I was a member of NYU’s Sports Business Society, and served as a team representative and Vice President for the Student Athlete Advisory Committee (SAAC). In 2012 I  was nominated to the NCAA Career in Sports Forum in Indianapolis and in 2014, I represented NYU at the UAA SAAC Conference in Boston.

Since moving to the Big Apple, I’ve become a Yankees-Giants-Rangers fan, despite still having ties to my Padres. Once a Cali girl, always a Cali girl. In 2011, I discovered hockey and went to my first professional game and became a Rangers fan overnight – but hey what’s not to love about the Blueshirts? The Garden has quickly become one of my favorite venues in the world, right next to Real Madrid’s Santiago Bernabéu Stadium.

I am not just a hockey fan, though. I cheer for FC Barcelona in La Liga and Arsenal FC in the EPL, I’ve spent a pretty penny on my fair share of athletics gear and events – I emptied my bank account for tickets to El Clásico and paid more than necessary on sports memorabilia at various stadiums around the world. In New York, I usually end up spending the majority of my paychecks on tickets to the Garden and on throwback jerseys. 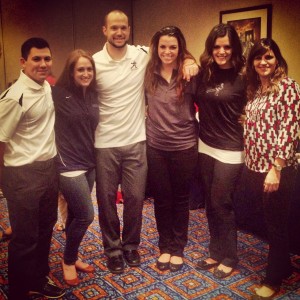 The Fall of my freshman year, I interned for the Heisman Trophy Trust, which was a dream come true. I worked with a small team supporting the coordinator and executive director with gathering information for the electorate database and coordinating with the electorate, sponsors and merchants for the presentation of the Heisman Trophy and awards dinner.  Every year I volunteer for Heisman Weekend, where I assist former winners, finalists, VIP’s, and guests, as well as work with media during our press conferences.

2013 was a year of travel for me. From a semester abroad in Spain to a two-week soccer tour throughout the United Kingdom that summer to a week in Florida for the Winter Meetings, I was more than blessed to see the world through an athletic lens. That fall I began an internship in the PR and Communications department at FOX Sports – a dream come true – as I realized my passion for all things sports broadcasting. I interned at FOX Sports in Corporate Communications for two semesters, before transferring to FOX Sports San Diego’s Marketing Department.

I graduated from NYU’s School of Professional Studies in December of 2014 as a University Honors Scholar, and was awarded the Allie Sherman Sports Business Award in May of 2015. I began my previous role at FOX Networks in May of 2015 as a Distribution Assistant and was promoted to Regional Distribution Coordinator in July of 2017.  I left FOX in April of 2018 and moved to Pittsburgh in search of a new career challenge in the media and marketing industry.

In my spare time, I enjoy working out, traveling, and trying new restaurants.

One thought on “Sports Scene”